Building Integrated Photovoltaics (BIPV): Too Good To Be True 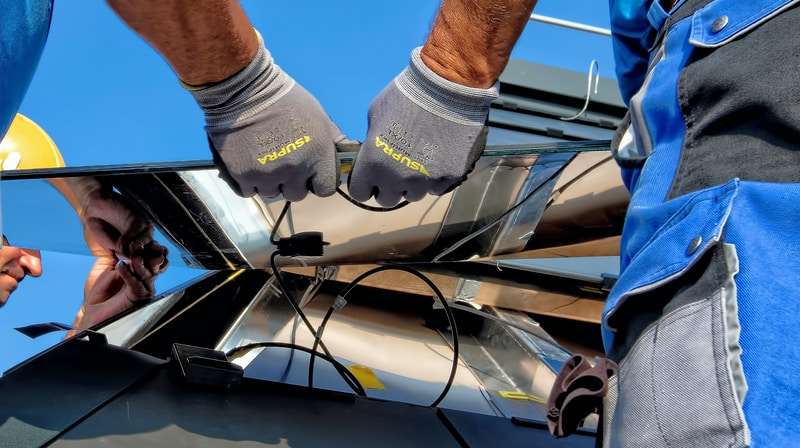 Solar cells that convert sunlight to electricity, otherwise known as photovoltaics, have been around since the mid 1950’s. Over the last seventy years, there has been a very strong effort to drive down the price of these silicon solar modules, made possible by technological progress, as well as advancements in mining and manufacturing practices. In recent years, there have been new developments regarding the types of solar modules available. New products that combine solar cells with more traditional building materials, such as solar shingles or solar awnings, are called building integrated photovoltaics (BIPV). As new forms of BIPV hit the market and generate hype, it will be important that potential customers understand the differences between thin-film technology, solar shingles, polycrystalline and monocrystalline solar panels.

Thin-film solar technology has been around since the 1970’s, and has many practical applications. We have all used solar calculators, powered by a thin strip of amorphous silicon. Thin-film also has its place in the world of BIPV. Large flexible modules can be applied to complicated buildings or structures that are not suitable for rigid solar frames. The main drawback to thin-film photovoltaics would be lower efficiencies (8%-13%) when compared to premium monocrystalline modules (16%-21+%). The lower efficiency makes this technology less appropriate for a residential rooftop, which often requires every bit of usable roof space in order to achieve the desired system size to offset one’s electricity bill. If space is not a concern, then thin-film solar might be a good option. For this exact reason, it is common to see large utility-scale solar farms utilize thin-film technology.

The oldest type of photovoltaic, crystalline solar modules, are also the most common type of solar modules available, and for good reason. These panels produce the highest efficiencies at the lowest price per watt. Polycrystalline photovoltaic cells consist of multiple pieces of silicon crystals, while monocrystalline photovoltaics contain cells comprised of a single silicon crystal, creating what is known as a “premium” module. Premium modules can range from about 16% – 21+% efficient, with polycrystalline modules clocking in just below that. These rigid modules have become an industry standard due to a simple installation process, falling costs, increasing efficiencies, and extended warranties.

Shortly after the turn of the century, solar shingles became a hot topic of the industry. What makes solar shingles such a unique form of BIPV is that they replace existing shingles, allowing the solar panels to double as a traditional roof and a photovoltaic system. However, something that sounds too good to be true usually is… This technology has not been around long enough for the price to be competitive with premium monocrystalline solar modules. There are only a handful of companies installing solar shingles at the moment, so most solar installation providers are not familiar with this technology. On top of this, there are hundreds of shingle-sized solar panels connected together, allowing for a greater possibility of failed wire connections when compared to a traditional roof-mounted PV system. All of these factors culminate into a more tedious and laborious installation process. These systems can be aesthetically pleasing, given that they are completely flush to the roof. However, solar panels are optimized when facing south (in the northern hemisphere). Asphalt shingles would still be necessary for the remaining rooflines, thereby creating an ugly transition from one type of shingle to another. Because this technology often relies on thin film photovoltaics, it is less efficient than other types of solar. The efficiency is further hindered by the fact that solar shingles can’t ventilate the hot attic air below.

It goes without saying that the cost of a solar electric system can vary immensely depending on a number of factors such as location, electric usage, and the types of solar equipment being installed.  Many of these new building integrated solar technologies simply are not financially competitive with monocrystalline photovoltaics. Because thin-film solar is less efficient than premium solar modules, solar shingles and other forms of BIPV require a greater area of the roof to be covered in photovoltaics.  Due to increased labor, lower efficiencies, and a more expensive product, BIPV can cost up to three times the installed costs of traditional solar panels for equivalent sized systems. It is also important to consider the condition of your roof. If you do not need a new roof, it is possible that you are being upsold a product that you do not necessarily need. If you do need to replace your roof anyways, solar shingles offer a two-for-one solution. However, this solution comes with a premium price: Solar shingles cost anywhere between $21-$35 per square foot, while asphalt shingles average around $3-$5 per square foot. Because of this huge price disparity, it is almost always cheaper to replace the roof with asphalt shingles and add monocrystalline solar modules than it is to replace an entire roof with solar roof tiles.

Just like any new technology, there are still some issues that need to be worked out when it comes to solar shingles. However, as the industry progresses we expect to see new developments in the way of BIPV, hopefully making the concept of solar shingles more feasible. For now, premium monocrystalline solar modules are the way to go when it comes to residential solar!