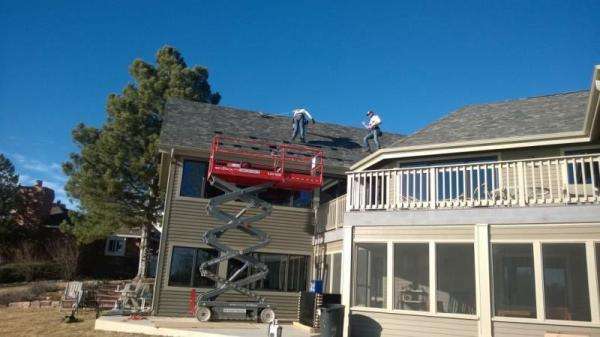 Now that you have made the decision to go solar, you are probably wondering whether to install a roof-mounted system, or a ground-mounted one if you live on a large lot. When most homeowners consider installing a solar array, they typically envision the system on their roof top. However in certain cases, it can make a lot more sense to opt for a ground-mounted system. So, what makes a roof top suitable for solar? And, under what circumstances should you choose a ground mount?

Generally speaking, installing solar on a roof top is the less expensive option. That being said, there are certain roofs that just aren’t well suited for solar panels. There are multiple factors to be considered, such as orientation and tilt, amount of free space, shading, and structural capability to support the array. The first factor to address is the orientation and tilt of your roof. Here in Colorado, the optimum orientation for maximum power production is 170-180 degrees from North, at a 40 degree tilt. With this in mind, it is important to remember that East and West facing roof lines will still be capable of producing about 70-80% of the power a South facing roof could generate. However, we would not want to install on a North facing roof line, due to very poor power production. Next we would need to make sure that the roof top has the space required to mount the solar panels, free from skylights, chimneys, roof vents, or other obstacles. So, if your roof has vents and skylights on the only portion of South-facing roof, then a roof-mounted array might not be your best option. Likewise, if you have large trees or chimneys that cast shadows on the roof, then a roof mount might not be the best option for you. Lastly, the roof should be structurally adequate to support the weight of the system, potential snow loads, as well as possible wind-uplift. The truss layout and roof design will need to be reviewed by an engineer before the roof can be approved for a solar installation. Unless you live in a very old home, most residential rooftops have the structural integrity to withstand the addition of a solar array. So as long as your roof is durable, free from obstacles and shade, and generally facing the right direction, than a roof-mounted system will more than likely be the less expensive of the two options.

What makes ground-mounted solar just a little more expensive is the need for heavy machinery for excavation, as well as additional racking and concrete. However, ground-mounted arrays offer the advantage of being able to position the panels at the exact orientation and tilt necessary for optimum power production. It is also much easier to avoid shading on a ground-mounted array. So if the orientation and tilt of your roof is not ideal, then a percentage of possible power production will be lost. A ground mount of the exact same size would produce more power, since those panels are at the optimal angle and tilt. Ground-mounted solar also offers other advantages when compared to rooftop solar. Solar panels operate more efficiently when temperatures are cooler, and ground mounts allow for more airflow to keep the panels from getting too hot. They also allow for easy expansion if you decide to add additional solar panels. Rooftops aren’t always large enough to allow for expansion of your solar array. Shingles also need to be replaced every 20 or so years, or after a major hailstorm of hurricane. While solar removal and resets are quite common, a ground mount eliminates that need altogether.

You can see just how many factors there are to consider, and why solar design can be quite complicated. As a general rule of thumb, if your roof is well suited for solar, then a roof mount is most likely going to be the most affordable option. Likewise, many homes in residential neighborhoods do not have backyards large enough for a ground-mounted array, leaving customers no choice but to install solar on their rooftop. However, if your roof is not well suited for solar, and you have the space, then nine times out of ten it will be less expensive to install solar panels on the ground than it would be to install a similar system on the roof, because the system on the roof would need more solar panels than the system on the ground in order to produce the same amount of power.

It is important to understand that each solar array is totally custom built to match the customers financial and energy needs. There are also other factors that further complicate system design, such as geographical location, configuration of the residences electrical meter/main breaker panel, etc. If you have any questions about either ground-mounted or roof-mounted solar, please reach out and call us at 970.482.SOLAR(7652), we are more than happy to help answer any questions.